What is Clomed by Balkan Pharmaceuticals? 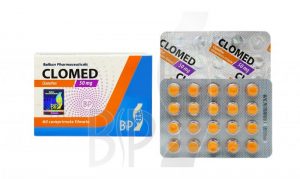 One of the most famous Selective Estrogen Receptor Modulator (SERM) that is extremely widely used is Clomiphene Citrate with the original brand name Clomid. This medication is in the exact same family as Tamoxifen Citrate known as brand name Nolvadex since they are both SERMs and they are both widely used in medical settings and for bodybuilding purposes.

While some people prefer Nolvadex, there are others who swear Clomid is much better. However, there’s also Clomed which seems similar to Clomid. Both these compounds are offering the active ingredient Clomiphene Citrate or simply Clomiphene but the difference between them is the price.

Clomiphene Citrate is generally sold as many other trade names except for Clomid such as Serophene, Clomed and others but Clomid is the original brand name and the most famous brand. Clomed is manufactured by Balkan Pharmaceuticals and is the exact same compound as Clomid but is offered for a much lower price.

This pharmaceutical company got very popular online because of high quality medications that are offered for low prices and Clomed is among them. It is much better to get Clomed instead of Clomid because the active ingredient is the same and is of the exact same high quality, but the price is much more affordable.

So, Clomed or Clomid containing Clomiphene is a medication that is prescribed for ovulation induction in infertile females and it might have other medical uses. Nonetheless, when is used in bodybuilding industry, the compound is used for Post Cycle Therapy (PCT).

The medication was approved for medical use in US in 1967 and is currently on the WHO’s list of the essential medicines meaning that is very important for the health system because is a very effective and safe medication.

Clomid or Clomed which offers Clomiphene Citrate, as mentioned, is mainly being used for infertility in women for inducing ovulation and is used by bodybuilders for PCT.

Although it may have other medical uses and it may be used as a gynecomastia treatment (anti gyno) in bodybuilding, other uses than those mentioned earlier are very rare. Despite the fact that Clomiphene is a SERM exactly as Tamoxifen is and having similar mechanism of action, Clomiphene cannot be used as Tamoxifen for anti gyno treatment because is much weaker for this purpose than Tamoxifen or especially compared to Aromatase Inhibitors (AIs).

Nonetheless, the compound is extremely widely used and very helpful for Post Cycle Therapy (PCT). What is a PCT and why would a steroid user need it?

When a person is using steroids on a regular basis, their bodies stop producing hormones and testosterone on their own because their LH and FSH numbers go down to nearly zero. While they use steroids they maintain high testosterone levels but after stopping to use the steroids, their body do not get enough testosterone. That’s why is so important to run a PCT plan for recovering the body’s ability to naturally produce testosterone. Clomiphene is great in helping with this.

That’s because Clomiphene Citrate is stimulating hypophysis and this is releasing more gonadotropins which are protein hormones that are being responsible for stimulating a faster and higher release of both Follicle Stimulating Hormone (FSH) as well as Luteinizing Hormone (LH). By increasing gonadotropins, FSH and LH are increased and this leads to a spike in the total testosterone production, therefore, the body is producing more testosterone levels until the body is going to recover and produce enough testosterone on its own.

In short, steroids are offering testosterone and body thinks that is producing too much and stops producing on its own. Clomiphene is stimulating more gonadotropins release which leads to artificially high levels of testosterone. Clomid – Clomed cannot be used as an alternative for steroids because is not anabolic and androgenic.

Clomid or Clomed both containing Clomiphene Citrate is coming in form of oral tablets that should be taken by mouth on a daily basis. The compound should be used carefully and do not use higher doses than required, otherwise this leads to overdose and nasty side effects.

When Clomid – Clomed is prescribed by doctors for a health condition, we recommend to use the compound exactly as mentioned by the doctor. However, if the compound is used by bodybuilders for a PCT plan, then dosages are usually anywhere between 50 up to about 150 mg a day.

There are rare situations in which people use 200 mg a day and even 300 mg a day, something that we won’t recommend due to high risks of getting negative side effects and due to the fact that doses up to 200 mg a day are considered more than enough.

By getting over the dosage of 200 mg a day, side effects that are usually reported include: altered mood or even depression, individuals suggest they are feeling very emotional. Some people suggest they are getting either lack or spike of libido.

You may also get headaches, light sensitivity, stomach discomfort and others. But then again, side effects of Clomiphene are very rarely reported when the compound is used in proper doses.

Not having a PCT plan is much more likely you’re going to go through nasty side effects after stopping a steroid cycle without a PCT. Clomiphene rarely offers side effects when used normally and properly but is offering huge benefits.

Clomid can be purchased for sale directly from this page on this website as the brand name Clomed manufactured by Balkan Pharmaceuticals because both compounds are offering very high quality Clomiphene Citrate but Clomed is offered for a much lower price.

Balkan Pharmaceuticals is creating only high quality medications including Clomed and this medication is amazing for females who cannot get pregnant into inducing fertility but is also extremely famous and widely used by bodybuilders for a really good PCT plan. Clomiphene is an amazing option for an amazing PCT plan, especially taking in consideration its very low price offered by Balkan Pharmaceuticals.