What is Exedrol by Balkan Pharmaceuticals? 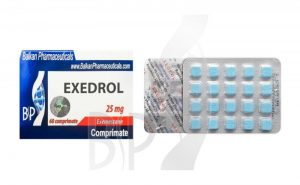 Exedrol is the medication that might be much better known by some people as Aromasin since is the original brand name for the active substance found in both these products called Exemestane. This active substance might be sold as many other trade names but Aromasin is the original brand name and is by far the most famous and widely used brand for Exemestane.

Nonetheless, Exedrol which is manufactured by Balkan Pharmaceuticals also containing Exemestane is the exact same product and is much worthy to get Exedrol compared to Aromasin due to the much lower price. While other generics of Aromasin might be lower in price too, they might be lower in quality as well. Aromasin is the high quality, but is high priced too. But then there’s Exedrol by Balkan Pharmaceuticals which is both very high quality of Exemestane and very low in terms of price.

That’s because Balkan Pharmaceuticals is aiming to offering cheap priced medications that are of the highest quality making medicine available to everyone who needs it. Exedrol by Balkan is not an exception and they try to offer it to everyone requiring it.

So, Aromasin or Exedrol containing Exemestane is a medication that is medically being used for treating breast cancer in women. The compound is treating hormonally receptor positive cancer which is requiring estrogen for growing.

This compound is an aromatase inhibitor (AI) pretty much as other famous brands such as Anastrozole (Arimidex) and Femara (Letrozole) and AIs are known to reduce the flowing estrogen in the body.

Being a compound that reduces estrogen, it can be helpful for other reasons too, for example, bodybuilders are using the compound too and is a famous drug among them for dealing with estrogen related side effects.

Exemestane which is found in Exedrol and Aromasin is having a half life of approximately 25-27 hours. The half life indicates the time for half of the amount of the drug required to be flushed out of the system. This means that the compound is staying active in your system for approximately 50-54 hours or so.

As mentioned, Exemestane found in Aromasin and Exedrol as well as other trade names is an aromatase inhibitor which is used for reducing the estrogen levels in the body. By reducing these hormonal levels, this leads to multiple benefits when there’s the need to lower the estrogen.

For example, the compound is used for hormonally positive breast cancer that is requiring estrogen to form and grow. By reducing estrogen, the breast cancer growth is stunt. Other than this, bodybuilders need to control their estrogen because by using aromatizable which are also called “wet” steroids they are increasing the estrogen levels. Too high estrogen levels might lead to negative side effects such as gynecomastia (gyno), water retention, hypertension and other side effects.

When the steroid users are using those type of steroids which convert into estrogen (like testosterone, nandrolone, boldenone and others), they need to use aromatase inhibitors (AIs) like Exedrol containing Exemestane for controlling the estrogen and therefore avoid getting side effects.

Exemestane is different from other AI’s because is a suicidal aromatase inhibitor which is permanently disabling the aromatase enzyme as soon as it binds to it. Other AIs like Arimidex are only temporarily blocking the estrogen from aromatizing and therefore there’s the risk of estrogen rebound. However, there’s no such risks with Exemestane that is a suicidal AI which permanently binds to the aromatase enzyme and is very effective at lowering estrogen levels. Studies proved that breast cancer patients are reducing estrogen levels by up to 85%.

Exemestane is usually coming in dosage of 25 mg per tablet. Exedrol is not an exception. It comes in tablets that are meant to be administered orally by mouth with a full glass of water once a day or at least once every other day (due to long half life).

Dosage of Exemestane found in Aromasin or Exedrol is very dependent on each individual because while a person might find a dosage enough, other might require more. It depends on the type and dosage of the steroid used.

Exemestane is used during the administration with steroids in case you need it for bodybuilding purposes and a starting dosage point is 12.5 mg every other day (half a tablet). Then 25 mg a day (full tablet) every other day and then dosage usually can be increased to 25 mg on a daily basis. Usually that’s enough for most people to deal with estrogenic side effects.

Do not use more than required because this would lead to too much estrogen inhibition and too little estrogen levels also come with negative side effects.

Exemestane found in Aromasin or Exedrol does offer side effects in case you’re going to take too high doses. While side effects are very rarely reported when the compound is used properly, side effects should be very seriously taken if they appear.

Side effects are usually controlled by reducing the dosage. Too high doses lead to too much estrogen elimination and this is going to have negative side effects on your mood, on your libido and on the joints health too, including many other side effects as a result of too little estrogen levels.

If the bodybuilder uses Exemestane properly, the estrogen levels would be balanced and then the side effects are very rarely reported.

Anyway, some side effects are still reported and they go as: joint pains usually from dryness, sweating, hot flashes, insomnia, headaches as well as nausea and fatigue.

Where to Buy Exemestane 25 mg? | Get Aromasin For Sale | Buy Exedrol by Balkan

Exemestane 25 mg can be purchased as the brand Exedrol containing tablets of 25 mg of Exemestane each. The trade name Exedrol is manufactured by Balkan Pharmaceuticals – the very famous pharma company which is selling high quality medications for very low prices. Exedrol is like Aromasin for sale because Exedrol is the exact same compound as Aromasin but is offered for a much lower price, this allows customers to save a lot of money while they get the exact same compound.

Exedrol from Balkan Pharmaceuticals is very important for every bodybuilder who is planning to use aromatizable steroids. That’s because such steroids are increasing estrogen levels and too high estrogen levels left uncontrolled leads to negative side effects. By using a proper dosage of Exedrol while using those aromatizable anabolic and androgenic steroids (AAS), the individual is able to get the amazing effectiveness of the steroids while avoiding their estrogenic side effects.

A combined use of these 2 compounds guarantees amazing results with no side effects.