What is Esculap by Balkan Pharmaceuticals? 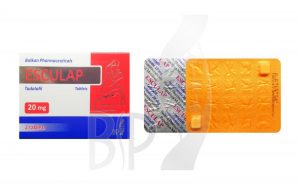 Esculap is the brand name for the extremely famous medication that is meant to deal mainly with Erectile Dysfunction (ED) condition called Tadalafil. Many of you might better recognize Tadalafil as its other much more famous brand name Cialis. Tadalafil, in fact, is having a lot of other trade names except for Esculap and Cialis such as Tadacip, Adcirca and many others.

Balkan Pharmaceuticals is a trust pharma company because is offering only high quality and purity drugs that are absolutely no worse compared to brands. Esculap is a medication manufactured by them containing Tadalafil and this drug is absolutely no worse or less in quality than Cialis, but is much more affordable and cheaper in price.

Esculap is offering the prices for generics and the quality for brand. Usually, brands are extremely expensive (as Cialis is) while generics are less in quality. However, Esculap is perfect in both.

So, Esculap or Cialis (or any other high quality trade name generic) containing Tadalafil is a type of drug in the family of PDE5 inhibitors that are mainly being used for treating erectile dysfunction but it has other health conditions too.

Tadalafil found in Esculap or Cialis, being a PDE5 inhibitor, is in the same class of drugs as other very famous ED medications such as Viagra containing Sildenafil Citrate (sold as Apollo by Balkan Pharmaceuticals) and Levitra containing Vardenafil.

All PDE5 inhibitors are having similar mechanism of action, but there are little difference between them.

Esculap or Cialis containing Tadalafil is going to work and be effective for approximately twice as much as is the half life because the half life is indicating the time for half of the the medication required to be flushed out of the system.

Other 2 medications are having much less half life than Tadalafil found in Cialis, Esculap or other trade names. Because of this long half life, the compound got nicknamed “the weekend pill”.

Esculap Onset of Action | How Long Does It Take For Cialis To Work? | Tadalafil

Unlike the effective period being very different from other PDE5 inhibitor drugs, Tadalafil is having the exact same onset of action as the other drugs. It is said that it takes approximately 20 minutes up to one hour until Cialis or Esculap is going to start working after the administration.

That’s why, Tadalafil should be taken at least half an hour up to one hour before the planned sexual intercourse in order for the medication to be effective.

What Does Esculap Do? | How Does Cialis Work? | What is Tadalafil Used For?

Cialis or Esculap containing Tadalafil is working in the exact same way as other PDE5 inhibitor drugs like Sildenafil or Vardenafil because they are all having the same mechanism of action.

However, this compound is much more likely to be offered for other health conditions other than Erectile Dysfunction (ED) because of its very long half life. Other uses of Tadalafil except for ED are Benign Prostatic Hypertension (BPH) as well as Pulmonary Arterial Hypertension (PAH) and that’s because the compound can be used on a daily basis.

The compound is working by inhibiting the enzyme called phosphodiesterase 5, the enzyme that is making the penis flaccid. The more of this enzyme, the harder is to get and maintain an erection. That’s because this enzyme is breaking down cGMP, a chemical that is relaxing smooth muscles and allows more blood to flow into the penis. Without cGMP, you can’t get an erection.

Tadalafil is blocking the action of the PDE5 enzyme so getting an erection is easier and maintaining it. However, without sexual stimulation, the product is useless.

Esculap or Cialis offering Tadalafil coming in form of tablets should be taken orally by mouth with a full glass of water with or without food because another difference between Tadalafil and other PDE5 inhibitors is that food cannot decrease the effectiveness and effective period of the drug.

Dosage for Esculap – Cialis containing Tadalafil is different from person to person but is usually anywhere between 5 up to 40 mg a day. Most common dose is 20 mg a day, the exact dosage that Esculap is offering per tablet.

Side effects of Tadalafil found in Esculap or Cialis are exactly the same as in other PDE5 inhibitors because of the exact same mechanism of action. However, side effects can be less intense due to prolonged half life, but due to the same reason, they might be more lasting in case you do get side effects.

Some of the most common side effects of Tadalafil includes: headache; flushing; stomach discomfort or pains; back pains and muscle aches, stuffy and runny nose; acid reflux, dizziness, nausea, heart issues like heart palpitations and heart attacks and others as well as hearing or vision impairment or loss.

Get Esculap by Balkan | Where to Get Generic Cialis? | Where to Buy Tadalafil?

Generic Cialis can be purchased directly from this website on this page absolutely hassle free and you’re going to get a very high quality Tadalafil compound as the trade name Esculap manufactured by Balkan Pharmaceuticals. This medication can be used on a daily basis and it would end all your Erectile Dysfunction (ED) problems, regardless if they are related with anabolic steroid use or not.

The best thing is that you can freely get the compound and be sure to get a genuine Esculap by Balkan Pharmaceuticals which would work the exact same way as Cialis since they offer same high quality and purity Tadalafil but you save a lot of money since is much cheaper than Cialis.