What is Salbutamol-BP by Balkan Pharmaceuticals? 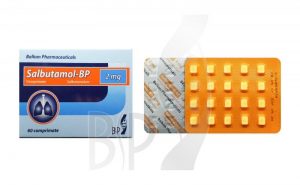 Salbutamol-BP is a short acting beta 2 adrenergic receptor agonist that is medically being used for offering the relief during the bronchospasm situations in different breathing disorders such as asthma and COPD (Chronic Obstructive Pulmonary Disease).

Balkan Pharmaceuticals is a very famous pharma company which gained huge popularity online for offering very high quality compounds for very low prices. This means that Salbutamol-BP containing Salbutamol also known as Albuterol is a very high quality product and you can be sure that every customer is able to save a lot of money on this compound.

This compound, except for being very widely used for breathing disorders as a prescription medication, is very widely used, off label, by bodybuilders in order to aid their fat loss process and to increase their performance as the product was proven to greatly help with such purposes.

This medication is currently on the WHO’s list of essential medicines which means that this compound is extremely helpful and is one of the most important drugs needed in the health system. Albuterol or Salbutamol was originally brought to the market many years ago in 1968 and is nowadays very popular.

As it was earlier mentioned, Salbutamol also known as Albuterol which can be found in Salbutamol-BP manufactured by Balkan Pharmaceuticals or other brand names is mainly used as a prescription drug for treating bronchospasm because of allergies, COPD as well as asthma, or it can be used as an exercise induced breathing difficulties medication too.

However, the medication is also having other uses too such as delaying premature labor, cystic fibrosis and even for hyperkalemia (which is a condition indicating potassium in blood). Other than this, Salbutamol – Albuterol is very widely used by bodybuilders and fitness models because the compound was proven to be very helpful for physique and performance enhancement when it comes to burning body fat more efficiently and faster.

It was proven in some studies that this product can help to increase strength, however, it is by far not as helpful for such purposes when comparing Albuterol with anabolic steroids. This is the reason why bodybuilders are using the compound only for increasing fat loss as a part of their steroid stack during cutting cycles. Salbutamol is used as a stack rather than being used alone.

Albuterol is stimulating beta receptors and this is causing vasodilatation when the blood flow is increased. Plus, it was proven to reduce stored fat because it stimulates the break down of the fatty acids. With increased blood flow, the individuals are receiving increased heart rate too.

The compound is little anti catabolic too, but since bodybuilders are using it alongside with steroids which are very anabolic, this effect is little noticed and pretty worthless. In short, the compound is making your body demand more fuel and therefore fat loss is happening more efficiently and faster.

You may have heard about a very famous medication that is also used for fat loss purposes Clenbuterol or simply Clen. With this being said, many people wonder what is the difference between them.

Other than being less harsh in terms of side effects, Albuterol is also having a shorter half life which means the compound would be flushed out of the system much faster.

Salbutamol Dosage | How to Use Albuterol?

As mentioned, Albuterol – Salbutamol is having a shorter half life compared to Clenbuterol and that’s going to be about 4 up to 6 hours. This is the reason why this compound must be taken in at least 2 split dosages used throughout the day. Taking in consideration that Salbutamol-BP by Balkan Pharmaceuticals is coming in form of tablets, you need to use 2 tablets a day in separate times for maintaining stable blood levels and receive maximum effectiveness.

The dosages for health conditions is varying depending on various factors such as how bad is the health condition and others. In most cases, for tablets version, it goes in dosages anywhere between 2-4 mg used orally 2-4 times a day.

Nonetheless, when it comes to bodybuilding purposes, most often, 4 mgs used 3 times a day (forming a total of 12 mg) in form of tablet is considered the moderate dosage for fat loss. Women should opt for doses twice less.

Is very important to drink a lot of water and to reduce the dosage if you get side effects. The cycle length is varying too, but the most common cycle is the one as with Clenbuterol – 2 weeks on and 2 weeks off for a total of 10 weeks (including the total of 4 weeks off).

As it was mentioned, a big advantage of Salbutamol – Albuterol over Clenbuterol (Clen) is the side effects profile which is much lower. However, is very important to understand that the compound still offers negative side effects and it still can be dangerous especially if taken in higher doses.

The higher the dosage, the higher chances of negative side effects. Some of the most common side effects include: insomnia, heart related issues such as heart palpitations, irregular heart beat and others, anxiety, headache, allergic reactions, flushing, muscle cramps, tremors and others.

Salbutamol also known as Albuterol can be purchased very easily directly from this website on this page as the brand Salbutamol-BP manufactured by Balkan Pharmaceuticals. This is a very famous pharma company which is offering very high quality drugs famous worldwide. The company is also known for offering low prices for medications affordable to everyone.

So, customers can get low priced Salbutamol-BP from this site from Balkan Pharmaceuticals and they can get amazing help with their fat losing purposes. The compound is known for being very effective at helping to burn body fat much faster and efficiently and in addition to that, the compound is considered much less harsher in terms of side effects than Clenbuterol. You get amazing effectiveness without side effects while you don’t pay too much for the product.