What is Fenandrol by Balkan Pharmaceuticals? 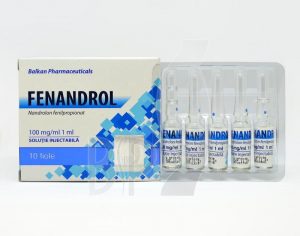 Bodybuilders who are searching for getting huge amounts of muscles, increased strength levels and generally a physique look that can compete on any stage have found the perfect steroid called Fenandrol manufactured by Balkan Pharmaceuticals. If you never heard about Fenandrol which is a lesser known and less popular trade name you have good chances you have heard about Durabolin since this the most famous brand name for the active substance found in both these brands called Nandrolone Phenylpropionate or shortly NPP.

Nandrolone is an extremely famous and popular anabolic and androgenic steroid (AAS) and in fact, is considered the most famous and widely used AAS for physique and performance enhancement by bodybuilders, athletes, fitness models, powerlifters and many other sports disciplines. The phenylpropionate is the attached ester to the Nandrolone but the most famous version of this steroid is Nandrolone Decanoate sold as Deca Durabolin or simply called Deca.

Nandrolone Decanoate is a much famous version than Nandrolone Phenylpropionate and is a much longer version of Nandrolone meaning that the release of the main compound (nandrolone) is much slower after the compound got administered compared to NPP. Nonetheless, while Nandrolone Decanoate is much famous and widely used, there are still a lot of people who swear that NPP is better for them. In the end, the only difference is the time they are released – faster goes into the system and faster flushed out when talking about NPP.

But what exactly is Fenandrol? This is the brand / trade name exactly as Durabolin is. Durabolin is more famous than Fenandrol because is the first trade name for NPP and is considered the “original” brand. However, while the only difference between Durabolin and Fenandrol is only the trade name, they both contain the exact same active ingredient – Nandrolone Phenylpropionate of a very high quality and purity. The only reason why Fenandrol is still better than Durabolin is the price.

Fenandrol manufactured by Balkan Pharmaceuticals is a very cheap NPP steroid which is capable to offer huge results while you pay less. Why the steroid is amazing and so famous? Because when stacked with testosterone, this makes one of the best combos for bulking cycles. A person is receiving huge amounts of muscles and strength with an overall performance increase.

How Does Nandrolone Phenylpropionate Work? | What Does Durabolin? | Fenandrol Uses

Nandrolone Phenylpropionate (NPP) found either in Durabolin or Fenandrol is not used in medical settings because of its longer version – Nandrolone Decanoate which is much preferred for medical purposes. This might be one of the reasons why bodybuilders choose Deca instead of Durabolin too.

While NPP still might be used for medical purposes such as treating breast cancer in women or HIV and AIDS wasting syndromes including other health issues, Deca is much more widely used. In bodybuilding, Deca is also more used than NPP, however, a lot of people prefer NPP. A lot of people didn’t even tried NPP because in the past, it was harder to obtain Nandrolone Phenylpropionate than Nandrolone Decanoate.

But generally, Nandrolone is amazing at treating anemia and the compound is going to be great at raising RBC and delivering oxygen to the muscles making them grow faster and more efficiently. Nandrolone is aromatizing into estrogen and is having a very favorable anabolic to androgenic ratio. It works by binding to the androgen receptor as all other steroids but it has different ways of affecting the body as soon as it binds to the receptors. The compound is popular because it helps to grow muscles, improves immune system, collagen synthesis, protein synthesis, nitrogen retention, helps keeping your joints healthy and all of that without offering too nasty side effects.

Nandrolone Phenylpropionate (NPP) found in Durabolin or Fenandrol is coming in an oil based solution which is mean to be injected intramuscularly and because of the Phenylpropionate attached ester that is offering a half life of approximately 3-4 days, the compound must be used on a daily basis or at least every other day in order to maintain stable blood levels.

Nandrolone should be stacked with Testosterone as this combination would keep you away from side effects and would enhance the effectiveness. Fenandrol can be stacked with other steroids, but the best one is with Testosterone. At such a combination you need to have an aromatase inhibitor. Cycle length with Fenandrol is anywhere between 8 to 10 weeks.

Nandrolone Phenylpropionate’s (NPP) side effects are exactly the same as with Deca because the main hormone is the same – Nandrolone. With this being said, any Nandrolone compound would offer similar side effects.

Natural testosterone production suppression is another side effect of Fenandrol or Durabolin and for this reason customers require a good PCT plan in order to stay away from low testosterone condition after stopping the cycle.

By using Fenandrol properly, there are very low chances that the users would get side effects, as long as they would also use other methods allowing to stay away from side effects such as healthy lifestyle and diet, cycle supporting supplements, PCT plan, aromatase inhibitors, not having any pre existent health issues and some others.

Nandrolone Phenylpropioante or shortly NPP is best known as its most famous brand name Durabolin which is a less famous version of Nandrolone Decanoate sold as Deca Durabolin or simply Durabolin.

While NPP is less known than Deca, there are a lot of people who swear that NPP is much better. Customers have the opportunity to purchase NPP as Fenandrol by Balkan Pharmaceuticals and this is going to save them a lot of money while they get an amazing steroid.

Those people who want to get huge with amazing increases in strength levels and muscular mass – using Fenandrol would be an amazing option both because of its amazing effectiveness and because you save money.