What is Danabol by Balkan Pharmaceuticals? 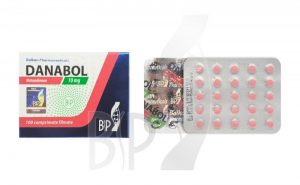 There’s an very high chance you have already heard about Dianabol and that’s because this is by far the most famous and widely used anabolic and androgenic steroid ever used for physique and performance enhancement.

Anyone who has done at least a little bit on steroids used in bodybuilding and for performance improvement has most likely heard about this steroid as is considered the most widely used and popular historically and nowadays. The steroid is known for producing huge increases in muscle mass and strength levels without too nasty side effects.

As much as we can see, the compound Danabol is having a very similar name to Dianabol, what are the differences? The manufacturing companies. Danabol is the compound manufactured by Balkan Pharmaceuticals and this is a famous pharma company which is known for producing the highest possible quality for medications at a much lower prices compared to brands and sometimes even to generics.

Dianabol is the brand name while Danabol is like a generic, but the quality of the active substance in these 2 trade name products, which is Methandrostenolone or also known as Methandienone, is absolutely the same. Customers save money by getting cheaper Danabol by Balkan Pharmaceuticals compared to Dianabol, but they get same product.

Dianabol or Danabol both containing Methandrostenolone as the active substance (which is also known as Methandienone) is overall a legendary and historical steroid. The steroid is coming in form of oral tablets and that’s one huge advantage because swallowing a pill always sounded less “scary” than constantly injecting yourself.

Dianabol or Danabol (often called by people Dbol) is the steroid manufactured after pure testosterone derivative and in fact, this compound is like an orally active testosterone with differences that is C17 alpha alkylated (making it orally active) and has difference on an added double carbon bond. This change was meant for reducing aromatization, but this increased it.

Methandrostenolone or Methandienone found in Dianabol pills or Danabol by Balkan Pharmaceuticals was approved in the past for hypogonadism for androgen replacement therapy treatment. Nonetheless, the compound is nowadays discontinued from a lot of countries and nowadays it has no medical uses in most countries.

However, the compound still remains the most widely used product for physique and performance enhancement purposes by athletes, powerlifters and bodybuilders. Most specifically, the product is used for bulking cycles in order to gain size, muscle mass and strength increases. The compound is very rarely or never used for cutting cycles for getting shredded because of the aromatization and estrogen increases, which lead to water retention and bloating that is not suitable for cutting and shredding.

However, Dianabol (Dbol) or Danabol is amazing for rapid muscle gains, for protein synthesis increases, improved recovery, amazing performance enhancer including increases in strength levels, it is generally amazing for gaining mass and it can also reduce fatigue too. All in all, this orally active AAS is a very powerful compound that can offer huge benefits when talking about physique and performance enhancement.

There are good reasons why the steroid ended up being the most widely used and famous steroid for such purposes and some of them include the fact that it greatly helps to build a lot of muscles and strength increase while it won’t offer nasty side effects, as long as is being used properly.

Methandienone or Methandrostenolone compounds like Dianabol or Danabol – Dbol, are coming in form of tablets that are meant for oral use by mouth taken multiple times per day in order to maintain stable blood levels and get maximum effectiveness. The compound is having a half life of about 4-6 hours and that’s why most people using Danabol would split up the total daily dose in 3 even doses used in the AM, before the workout and PM.

The compound is offering “wet” gains with puffy look and water retention and is mainly used only as a kick starter for a bulking steroid cycle during the first 6 weeks in order to gain muscles fast. Very often this steroid is stacked with long based steroids such as Deca, Testosterone and even with Trenbolone. The compound is also sometimes used alone, but stacking is the preferred method for most people.

Due to the fact that is C17 alpha alkylated meaning is stressful for the liver, people use it for 6 weeks or maximum 8 weeks, do not use more for keeping your liver healthy. Also, dosage is depending on a number of factors but most people prefer doses anywhere between 30 up to 80 mg a day, where 50 mg a day is the best dosing for most people.

Add aromatase inhibitors for dealing with estrogenic based side effects and a good PCT cycle at the end.

As mentioned, Dianabol – Danabol is offering estrogenic side effects and that’s why a AI during the use of this steroid is so important.

In fact, Methandrostenolone was meant to aromatize (convert into estrogen) less compared to testosterone, but it ended up being much more estrogenic. That’s why, estrogenic side effects such as bloating, gynecomastia, blood pressure issues etc. are to be expected.

Also, it was mentioned, that Danabol is orally active steroid and as most of them – is hepatotoxic meaning that liver health is at risk. Using cycle supporting supplements which can help keep your liver healthy is very important.

Androgenic side effects are to be expected too, although not as bad as with other steroids, but they are still possible. Here we can mention oily skin, acne, hair loss, aggression and many others. Dbol is not a steroid for women because of the virilizing also known as masculinizing side effects.

Danabol is considered a fairly safe steroid despite being very powerful, nonetheless, an improper use of the steroid is definitely going to lead to negative side effects so use the compound only if you have enough knowledge on how to do it.

Where to Buy Dianabol Pills? | Where to Get Methandienone? | Buy Danabol by Balkan

Everyone is free to buy Dianabol pills directly from this page on this website as the brand name Danabol manufactured by Balkan Pharmaceuticals and customers are ensured to receive the same high quality and purity of active substance Methandienone – Methandrostenolone which is going to work wonders for physique and performance enhancement purposes, especially when talking about bulking – gaining mass and strength.

This is the most famous and top 1 most widely used steroid for physique and performance enhancement which is quite obvious taking in consideration its fairly safe an extremely effective. There are bodybuilders IFFB pros and athletes who use the compound and even legends like Arnold Schwarzenegger and Sergio Oliva who admitted to have used Dianabol. Save money with Danabol by Balkan and get big while be safe of side effects.